After meeting some great collectors from around the world - from France to Australia and Japan, we continue our Meet the collectors series. This time I did not have to travel far, as the collector we visit today lives quite close from me; in fact, at biking distance.

A few weeks ago, I had the pleasure of meeting fellow Dutch collector Sander Slootweg, who gave me a tour around his game room. As we will see, Sander's collection spans many interests, including - most definitely - a love for Nintendo and Gunpei Yokoi in particular.

This is going to be long post, but I am sure it will be well worth the read, as Sander's collection is nothing short of amazing.


Sander's game room is a mix of arcade machines, carefully arranged display cabinets brimful with collectables and great wall decorations. The special lighting arrangements and overall attention to detail give his room a museum-like quality.

A lesser known chapter in the history of Nintendo is their period as producer of packaged food.

In the early 1960s, Nintendo was part of a three-company consortium that was called San'ō syokuhin (サンオー食品株式会社). The other two members in the consortium were the University of Kyoto and the Omikenshi Company.

Nintendo had set up this consortium as a response to the tremendous success of Cup Noodle, the instant noodle dish invented by the Japanese firm Nissin in 1958. The Nintendo led consortium's purpose was to take a piece of the growing market for convenience food. In order to do this, they developed a new product: instant rice. They would later also produce instant noodles (ramen).

The San.o products did not become a big success (lore has it that they did not taste very well) and because of the very nature of these perishable goods, very limited evidence of them remains today.


Recently I did find one of their sales promotions. This promotion was an effort to boost sales for San.o Popeye Ramen (ポパイ ラーメン). Apparently, a prize draw was held for customers of this brand of ramen, with the lucky winners receiving a pack of playing cards. 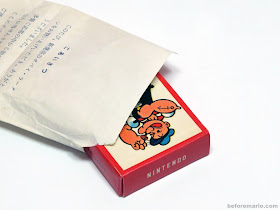 With Nintendo involvement in the San.o consortium, it was almost inevitable that the sales promotion would use one of Nintendo's own products, which at this time were still predominately playing cards.

The sexual revolution that swept through the Western world from the 1960s onwards is characterized by big changes in people's sexual morality, their views on interpersonal relationships, dating etiquette and attitudes towards physical contact before marriage.

It also had an impact on the toy scene, in particular on party games. All of the big American toy companies created games that catered to this new demand for swinging, groovy fun.

The first of these kind-of risqué games is MB's Twister, from 1966. It is also the most successful in this genre, up to this day.


At the time, many people likely will have considered Twister as inappropriate or even lewd. The official goal of the game is to try and not touch each other too much. Still, obviously, the real fun is had when this objective fails and you cannot help but collapse into a human pile.

After MB's huge success with Twister, fellow toy giant Mattel followed with the downright scandalous Tight Squeeze. Touching each other is no longer a side effect here. This game is centered around strapping a bunch of people tightly together in pairs, in a big belt-like contraption, and seeing who can squeeze out first. In cases where the game partner was to your liking, I am sure people were in no hurry to finish the game, maximizing the wiggle time. 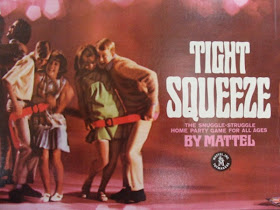 Tight Squeeze was advertised as "The Snuggle-Struggle Home Party Game for All Ages".