Today we continue the series about Nintendo's Iroha Karuta with some oblong shaped sets. 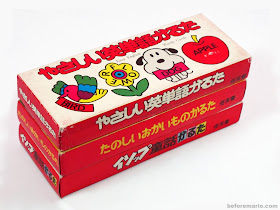 Although these do not use the name 'Iroha' (いろは) on the box, but simply label them as 'Karuta' (かるた), they are in fact used to play the same games as the sets we saw in blog posts part 1 and part 2.

The Nintendo name in kanji (任天堂) is used as brand logo, without any further brand name in Roman script, which is quite unusual. 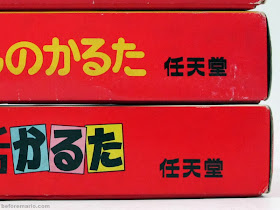 The sets do not have a clear release date, but based on the style of the packaging I believe they stem from the second half of the 1970s. Each of the three sets has a different subject matter. 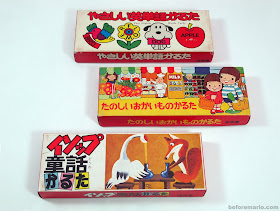 
As with all Iroha Karuta, a set consists of 48 'yomifuda' or 'reading cards' and 48 'torifuda' or 'grabbing cards'.

The yomifuda of this particular set contain a sentence related to a simple English word, with the meaning and pronunciation of this word listed in English as well as in Japanese. 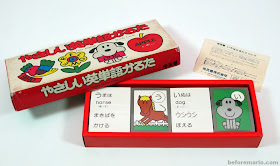 When playing the game, you could either read the Japanse sentence or - to really practice your language skills - only the English word. The players then need to find the torifuda that contains the first syllable of the word in Japanese.

For instance, when 'dog' was read, you had to grab the corresponding card with 'i' (い) from 'inu' (いぬ), which is Japanese for dog. 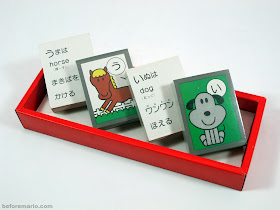 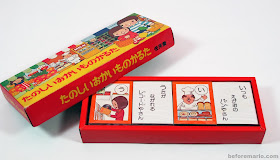 The cards shows all sorts of shop items, ranging from food to luxury items. 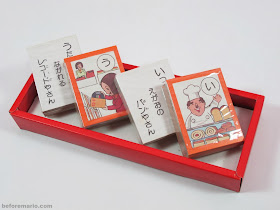 The third and final set shown here is based on famous fairy tales. 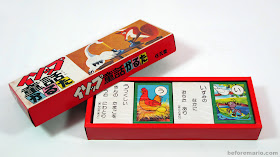 Aesop was an ancient Greek storyteller, who is credited to have created many fables, most of which are very well-known up to this day, like the Fable of The Tortoise and the Hare and the Fable of The Boy Who Cried Wolf.

The picture on the front of the box is based on the Fable of The Fox and the Stork. 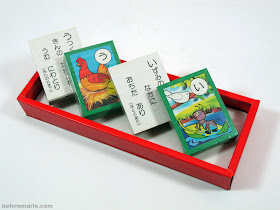 Besides the three sets shown here, Nintendo released at least four more sets in this format. These were based on the popular anime series Manga Nippon Mukashi Banashi (まんが日本昔ばなし) and Ikkyū-san (一休さん). 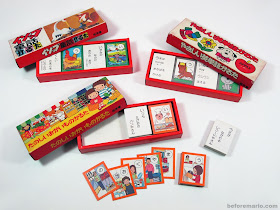