In the mid 1960s, Nintendo started producing plastic toys and games. One of its earliest is the racing themed marble action game shown here. 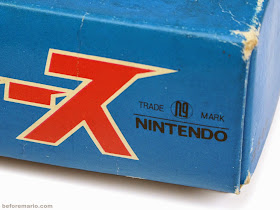 The exact release date is unknown. There is no year listed on the box or manual, but the style of the game, box art and logo indicates it is from around 1965, possibly early 1966.

The front of the box depicts two cars that look a lot like the Jaguar E type, which was one of the hottest sports cars of the 1960s. 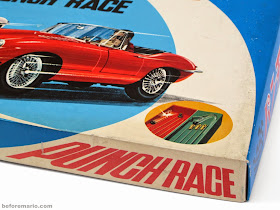 The box art also contains a large white curly shape that enhances the feeling of speed, with the name of the game flying out on the side of the box.