Some time ago, I posted about a Nintendo company report from 1970, which provided an interesting view inside the company at a time when they were expanding into an allround toy company and just starting out in the field of electronics.

Today we will travel even further back in time, to the mid 1930s, when Nintendo was still fully and solely focussed on their original product: playing cards. At the time Nintendo was the largest manufacturer of playing cards in Japan and under management of its second president Sekiryo Yamauchi, who in 1929 had succeeded his father in law, company founder Fusajiro Yamauchi.


We take our trip through time using a recently surfaced Nintendo product catalogue that is more than eighty years old. The exact publishing date is not known, but based on the content, it is believed to be from between 1933 and 1937.

The catalogue measures 19.2 by 8.6 centimeters when closed. It contains 16 pages that fold out to double that width. It is printed double-sided in four colours: black, red, green and blue. Different to Western catalogues and modern day Japanese ones, the pages of the catalogue open on the left. The Japanese writing is top-to-bottom and right-to-left, as was also common at the time. 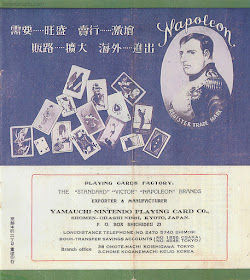 Although the catalogue contains some information in English, it is aimed at a Japanse speaking audience, with all sales information in Japanese only. 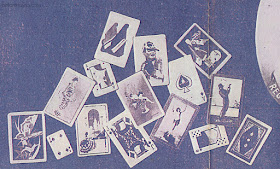 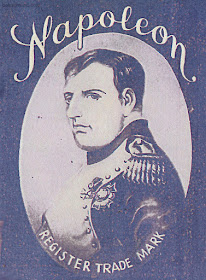 Napoleon is the main brand used by Nintendo for their playing cards, up to the present day. Other brands used at the time by Nintendo were Standard and Victor.


The official company name at the time was still Yamauchi-Nintendo, after its founder.

When we compare the location information in this catalogue with the information on a company calendar from 1915, it appears that not much has changed in the intermediate twenty year period: Nintendo's address, telephone numbers and bank account details are still the same.


A big change had happened, though. In 1933 a new building had opened, built on a plot in Kyoto next to the wooden workshop where the company started back in 1889. This brand new, modern brick building is presented in the catalogue as the Nintendo head office (任天堂本店).


A few years back I visited this building, although unfortunately only on the outside. See this post for a report of this visit.

The next images show Nintendo's two production facilities, both located in the Higashiyama district of Kyoto, close to the head office on the other side of the Kamo river. In the first factory (第一工場) the western style playing cards (called trump or トランプ) were made.


At the second factory (第二工場) the traditional Japanese cards (so-called karuta or かるた) were produced.


As part of the country-wide sales and distribution network, at this point in time Nintendo also maintained two branch offices.


One of these branch offices, shown on the right in the above picture, was located in Tokyo (東京支店). The other one in Keijo, Korea (京城支店). Keijo was the name given by the Japanse to present-day Seoul in Korea, during the period of Japanese occupation that lasted from 1910 until the end of the second world war in 1945.

Besides the listing of offices and factories, the catalogue includes with an overview of the Nintendo product range. 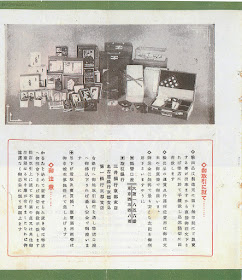 At the time, Nintendo produced a wide variety of playing cards: hanafuda (花札) sold in loose packs or bundled in sets of two, western style playing cards, as well as 100 poem card sets (so called hyakunin isshu cards or 百人一首かるた). 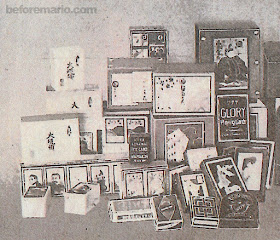 Additionally, Nintendo sold family game sets that combine hanafuda playing cards with other card games and some other game elements like dice. These sets came in sturdy, luxuriously made boxes or cases, made using materials like leather and velvet. 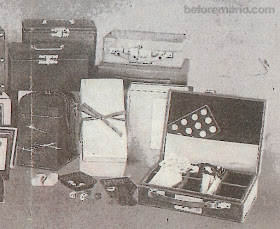 Next, the catalogue goes into detail for all available products.

The Napoleon trump western style playing cards were produced in different sizes. The catalogue shows seven options in real size, from small to big. Some of these sizes are referred as "Italian", "American" or "French". 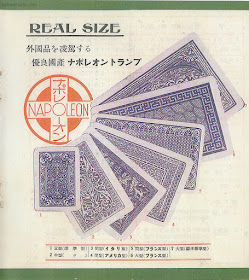 Many different print designs were available for both the hanafuda and Western-style playing cards. 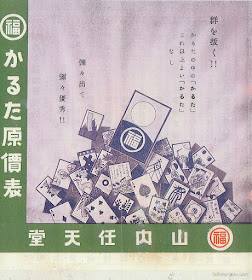 As sales catalogue usually do, it boasts about the quality of these cards, stating these cards exceeds all other cards available in the market. 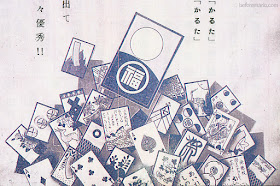 The remainder of the catalogue lists all different products and products variants, with their prices. The title page below, designed in the art deco style popular in the 1920s and 1930s, states this relates to wholesale (定卸) prices, so not the final end-user consumer prices. 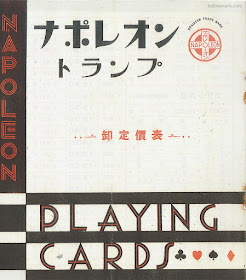 An example of the tables included is shown below. 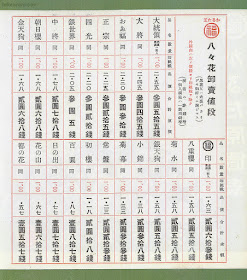 That concludes this peak into the past of Nintendo. In a follow-up post I may dig a little deeper into the details presented in these product tables.

For a comparison with Nintendo's playing card range in the 1950s, see this post, and with the range in the 1980s, check out this catalogue from 1983.

The previous post about the company overview from 1970 can be found here.

A thank you to Fabrice Heilig, for providing these wonderful scans.
Erik Voskuil
Share