This being the first post of 2020, let me start by wishing you the best for this year. Granted, a quarter of it is already over. And with the global virus pandemic in full effect, it probably will not go down as one of the best years ever. But still, I hope you can make the most of it.

The last months I have been able to add some missing items to my collection, and I plan to show these in a few blog posts over the coming weeks, and included some things I have not covered before as well.

Today we start with a game from Nintendo's Mini Game series. The game is called Picture Puzzle (ピクチュアパズル). Like all of theseMini Games, it dates from the first half of the 1970s.

As reported a few month ago, I was chasing the last one of the 50 known Mini Games that I needed to complete the collection of these fun little toys. To my surprise I discovered another one, that I was not yet aware of.


This particular Mini Game is very simliar in style to two other Mini Games already in my collection, shown here in the middle and right in the picture below.

These two other games, although appearing to be different, both contain an identical set of three cardboard puzzles. It is just a different one of the three that is shown on top in the blister pack. 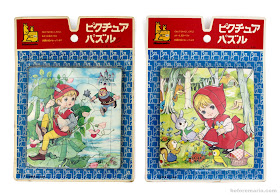