One of the intriguing Nintendo products from the 1970s is the Ele-conga, an analogue electronic musical instrument.

Although not hugely expensive given its build quality (retailing at ¥9.800, which is roughly ¥30.000 in todays money when corrected for inflation), it was intended to be a serious instrument, not a toy.

That Nintendo was aiming for this to be an item for adults, is evident from the photo on the front of the promotional leaflet. It shows a trio of grown-ups making music with two Ele-congas, accompanied by an acoustic guitar.


On the back of this leaflet, three accessories are listed, that were sold separately as options:

The Auto Player (オートプレーヤー), pictured in the left-bottom corner of the back of the leaflet, allowed for programmed rhythms to be repeated (semi) automatically.

Although the Ele-conga includes its own speaker, it was possible to connect it to the line-in of a music center or tape deck, for external amplification or recording. The Connector Cord (コネクタコード) was a two-meter long cable that provided the required connection, using standard 3.5 mm jacks.

While pretty rare today, both the Ele-conga and Auto Player can be found as second hand items in Japan, if you know where to look and show some patience and perseverance.

An official Ele-conga Connector Cord, I have never seen in real life, though I still hope to find one, one day. As is often the case, accessories such as these are very hard to find, as they were sold in (much) smaller numbers than the Ele-conga itself. They also got misplaced or lost more easily, or no longer recognised for what they were, and thrown out.


For many years, the Soft Case (ソフトケース) also remained only an option listed on a piece of paper. As no picture was included on the leaflet, and none of these appeared in collector circles, it was not clear what this case looked like, or if it was actually produced and sold at all.

This changed recently, when one of these showed up at last.

So presented here in its full glory: an original Ele-conga Soft Case from 1972! 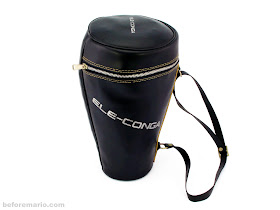 This empty, rusty little tin may not look like much to the casual observer.

Still, it is one of the prize possessions in my vintage Nintendo collection, because of it's part in the company's history. 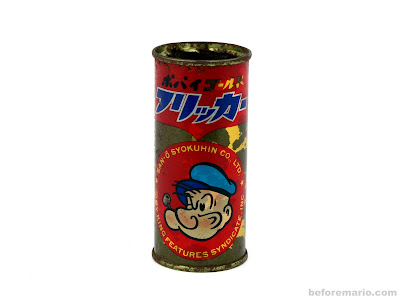 It is rather small, with a height of only 9.3 centimeters and a diameter of 2.4 centimeters. The top is opened, and it's contents are long gone. 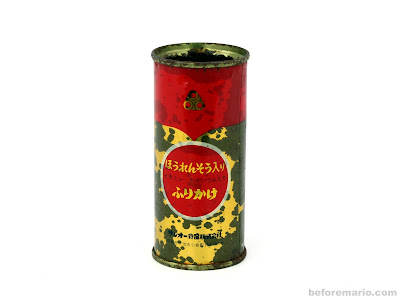 The brand name on the front is Popeye Gold Flicker (ポパイ ゴールド フリッカー). When it was still new, some sixty years ago, the tin must have been shiny gold coloured. Part of this colour is still visible, though much has disappeared over time. 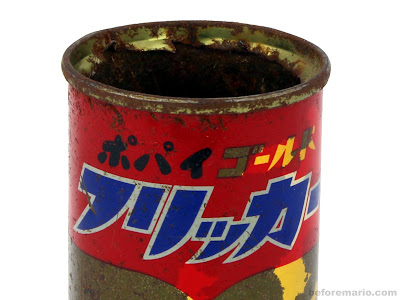 The company name on the front is not Nintendo, but San'ō syokuhin Co., Ltd. This company, started in 1961 when Nintendo's business was still going into multiple directions, was Nintendo president Hiroshi Yamauchi's vehicle for entering Japan's food industry. For this Nintendo started a joint-venture with two partners: the University of Kyoto and the Omikenshi Company. This joint venture was called San'ō syokuhin.

The San'ō syokuhin company developped a number of products for the growing market of convenience food: instant rice, instant ramen and seasoning mixes. This tin is an item from their range of such seasoning products, that are called furikake in Japan. Hence the brand name Flicker, pronounced "furik-kaa" in Japanese.

An important part of the marketing of the San'ō syokuhin company was the use of licensed figures from America, in particular Popeye and Disney characters. A few years earlier, Nintendo already had acquired license rights for the use of these figures on their playing cards, and thus had the contacts to extend these rights for these food products. 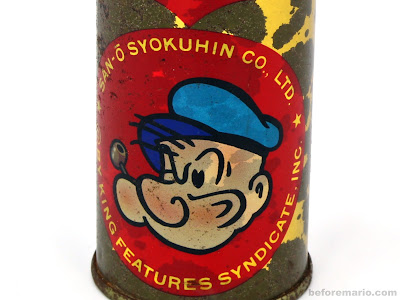