Recording, watching and sharing video has become so much part of our daily life, that it is hard to image a world without easy access to a 'rec' button. Of course, this has not always been so.

The first video recording and playing machines for professional use appeared in the 1950s. Since the late 1960s, electronic firms together with broadcasting companies have worked on equipement for home use.

In the mid 1970s, Betamax and VHS emerged as widely adopted competing standards, of which the latter became the ultimate victor. VHS was extremely successful, before sinking into obsolescence after the introduction of the DVD and digital video recorders around the turn of the millenium.


But before the world settled on VHS, a plethora of different formats was developed. One of these was called 'Electronic Video Recording' or EVR for short.

Nintendo used this system in a number of its arcade cabinets.


Two different lines were created based on the EVR technology: EVR Race and EVR Baseball.

In a previous post, we looked at the Jumping Bottle light gun target. Now that made perfect sense: shooting at bottles, be it in a safe electronic toy format.

Today it is the turn of a slightly less obvious shooting target: Electro Poker. 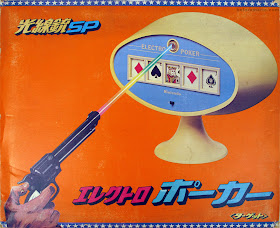 The idea here is to combine playing a variant of poker with light gun shooting. A bit like an indoors biathlon. 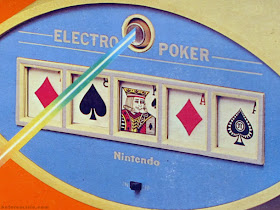 Each time you hit the target, the five wheels holding pictures of various playing cards will start turning individually. After some time they stop and show a certain combination of cards, which then determines your score. Much like throwing dice in dice poker.

The 1967 Nintendo baseball pitching toy Ultra Machine came with a large instruction sheet. This sheet was a fraction smaller than the box, and placed on top of the plastic tray that holds the various parts of the Ultra Machine.

There are (at least) two different versions of this sheet. The oldest one has a nice full-color picture of the Ultra Machine on the front.


The Japanese katakana name for Ultra Machine is ウルトラ マシン. On the packaging this is writing in a stylized way: somewhat slanted to give the impression of speed and the three short strokes in last two characters (シン) are made to look like flying balls. 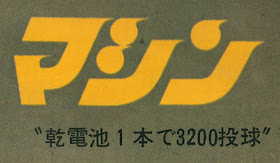 The Ultra Machine runs on a single D (UM-1) cell, and the instructions claims that one battery is good for 3200 pitches (「乾電池１本で３２００投球」).

I recently found a leaflet for Nintendo's Color TV Game Racing 112. The leaflet is a bit stained on the back, but still a nice relic from the late 1970s. It is dated June 26 1978.


During these early video game days, game play was portrayed as something for the whole family. With only a single tv set in most houses, it would usually take place in the middle of the living room.

In 1972 the whole of Japan went panda crazy. This was caused by the arrival of two pandas, received by the Ueno zoo in Tokyo from the People's Republic of China.

Not only were these the first pandas on display in post-war Japan, but the fact that China gifted these animals was a milestone step in the restoration of the relationship between the two Asian neighbors, destroyed by the violent and dramatic events of the Second Sino-Japanese War which ended in 1945.

China, the only country in the world where pandas live in the wild, has a long history of offering these as special gift to foreign countries. This is referred to as panda diplomacy. Japan received a first pair already in the 7th century.

With the arrival of a new pair in 1972, pandas became very popular for a while and Nintendo jumped to the occasion and created some panda themed games.


The two pandas that arrived in October of 1972 were a couple called Lan Lan and Kang Kang. It is the female panda Lan Lan who appears on the front of the Nintendo box.