After their early days producing mainly Hanafuda and other playing cards, and temporarily side-stepping into various other markets in the 1960s, at the end of that decade Nintendo had transformed into a toy manufacturer with a broad range of products, sold throughout Japan.

The document shown here gives a detailed insight into just how many different items the company offered at that time, from traditional games to new and innovative toys. 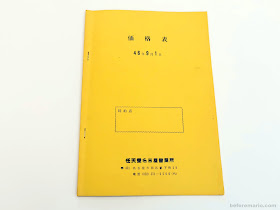 It was published by the Nintendo Nagoya Sales office (任天堂名古屋営業所), one of Nintendo's four sales offices at the time (the other ones were in Sapporo, Osaka and Okayama). Together with the headquarters in Kyoto, a branch office in Tokyo and two distribution centres, these constituted Nintendo's operation. [For a company tour of Nintendo in 1970, check out this post.] 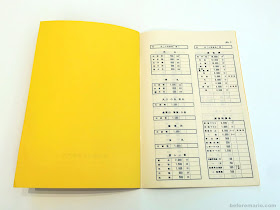 The document consists of seven thin paper pages, that are printed on one side with tables in black. In the back, a single fold-out page with colour pictures is included, that is printed on both sides. 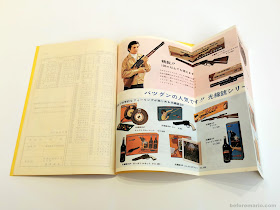 The first page aptly begins with Hanafuda (花札), or 'Flower Cards', which was the company's first product, offered here in five quality versions. The top-of-the-line is Daitōryō (大統領), featuring the familiar picture of Napoleon on the wrapper, followed by, in descending price, Otafuku (お多福), Three Cranes (三羽鶴), Tengu (天狗) and City Flowers (都の花).

These 'standard' Hanafuda are followed on this page by:

This is followed by a selection of dice (さいころ).

The right column on page three lists over thirty games (ゲ ー ム), consisting mostly of toys and board games. This is were Nintendo's newfound focus as general toy maker really shines through. Besides some licensed toys, this includes the very successful, original toys designed by Nintendo's in-house team. Increasingly, this is the part of their product offering that is generating most of the revenue.

The top four of the games are marked as 'new products' (新製品), introduced in 1971.

Page four starts with Nintendo's most expensive and advanced products at the time, the Kôsenjû SP (光線銃 SP) range of light guns and targets that was introduced in 1970, followed by the Kôsenjû Custom (光線銃 カスタム) rifle, scope and target added in 1971.

The page continues with:

The final two listings on this page are for a Picture Puzzle Set (ピクチュアパズル セツト) and Jumbo Colouring Set (ジヤンボ ぬりえセツト). These are wholesale offers that include 64 and 80 items, respectively, allowing a shop to buy a whole store section at once. For the first it is mentioned that it has a retail price (小売価格) of ¥14,400 and a wholesale price (卸価格) of ¥10,000. For the second, with a total sales price of ¥16,000, it is mentioned that it comes with display box (デイスプレイボックス入).

Page five starts with the N&B Block (N&B ブロツク) range, that consists of 22 different sets plus parts sets. Most of these were already introduced a few years earlier, with the exception of the first three listed here, that are new: Electric Clock Building (電気時計ビル), Electric Clock House (電気時計ハウス) and Electric Clock Rocket (電気時計ロケツト). For more details on all these N&B Block sets, see this overview.

After all these modern toys, the price list returns to more traditional products: Go and Shogi sets (碁将棋セツト), Go stones (碁石) in many qualities and types of materials, as well as containers for Go stones (碁器), from plastic, metal and chestnut wood.

The last item on this page is a Glass case for display (陳列用 ガラスケース), for ¥4,000. This would allow shop owners to display the Nintendo products in an attractive way in their shop.

The largest, heaviest, wooden Go boards, the ones with feet (足付), are actually the most expensive items in Nintendo's 1971 product range (going up to ¥20,000).

The last page of this Nintendo price list was a bit of a surprise.

The page is labeled Jokes and Magic Tricks (ジョークトイ及手品), and contains a range of products that were produced by the Japanese company Tenyo (テンヨー).

Tenyo is a well-known name in circles of magicians and magic trick fans.

Established in 1960, Tenyo has since invented and produced many attributes for magicians, amateurs as well as professionals, that are sold and used around the world. Besides these magic tricks they also make joke items like Pepe Shock (ペペショック) and Punch Gum (パンチガム) shown above.

Although the Tenyo name is not mentioned at all in this Nintendo document, there can be little doubt about the origin of the products listed here, as their names match one-to-one with Tenyo's product line of tricks, toys and party items.

It was already known that Nintendo and Tenyo had a longstanding relationship. For decades, many of Tenyo's card tricks have included playing cards manufactured by Nintendo, and Tenyo more recently produced a reproduction of Nintendo's Love Tester and a re-issue of Ultra Machine.

Additionally, looking at this 1971 Nintendo price list, it appears that Nintendo acted as a distributor or wholesaler for Tenyo around this time. 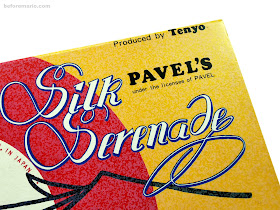 The products most likely still featured Tenyo's own packaging and branding, like the ones shown here. At least, no Nintendo branded versions of these items are known.

An extensive set of items is offered, in the following sub-catgories:

The colour fold-out page in the back of the price list shows the company's meat and potatoes; a selection of Nintendo's most recent innovative products as well as some slightly older big sellers.

The frontside is reserved for the so-called Kôsenjû series (光線銃シリーズ) of light rifles, light guns and related targets, that are claimed to be 'exceptionally popular' ('バツグンの人気です!'). More on those here. 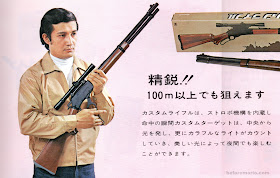 Most eye-catching is the very authentic looking and quite expensive 'elite!!' ('精鋭!!') Custom Lever Action Rifle and Scope (光線銃 カスタム レバーアクション ライフル, スコープ) that had just been released, with a promise of a range of 'at least 100 meters' ('100m 以上でも狙えます'). 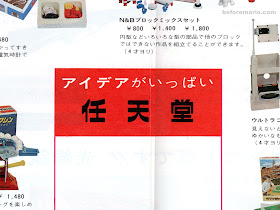 Compared to what the company offered just five years earlier, the number and variation of products is quite amazing. It is with right that the leaflet states, just above the Nintendo kanji: 'Full of ideas!' ('アイデアがいっぱい'). No shortage of ideas, indeed!

For completeness, we include a scan of the back of the document, although not much is going on there.

If you are interested in more Nintendo documents from this period, check out this 1970s' brochure, this leaflet from a toy trade magazine in 1975 and this playing cards catalogue from 1983. For more information about specific products, check out this overview of Nintendo toys and games.