In the period 1965-1970, Nintendo released two soccer simulation games. In a previous post we already looked at Table Soccer (テーブル サッカー) from 1965. This game was licensed from UK toy company John Waddington. 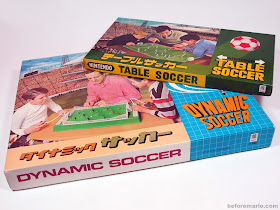 Table Soccer is similar to the well-known Subbuteo soccer game - based on finger-flicking miniature plastic player figures and thus maneuvering the ball towards the goal, as well as defending that goal. 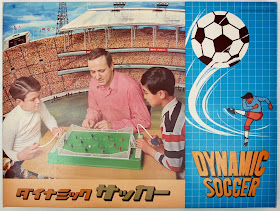 Around this time, Nintendo had stopped licensing games and Dynamic Soccer was also an original game created by Nintendo themselves.


Dynamic Soccer retailed for ¥1.980, which was a lot more than Table Soccer sold for. Production cost will also have been higher, as Dynamic Soccer included a large plastic field with a nifty playing mechanism, as we will see shortly. 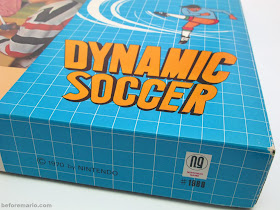 This game was released in a period when the Nintendo brand logo was still very much in transition. On one side we still find the 'NG' logo used throughout most of the latter half of the 1960s, while on an other side of the box a quite unusual variation of the 'racetrack' logo, with pointed sides, is shown. 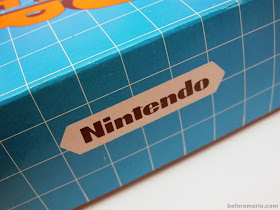 Dynamic Soccer is a relatively large game, and consequently it came in a big box measuring 45 by 60 centimeters. 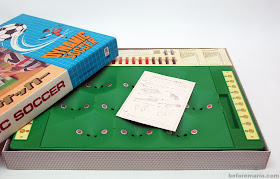 The pattern printed on the bottom half of the box consist of many small 'NG' logos. These stand for 'Nintendo Games' (well originally they meant 'Nippon Games', but that is a different story). 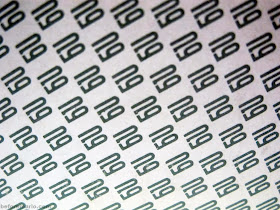 Inside the box we find the large play field and a tray with all other play attributes. 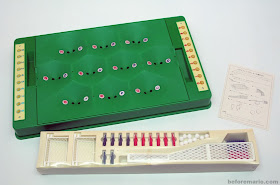 These attributes consists of two goal posts and some fences to enclose the play-field. All in white plastic. 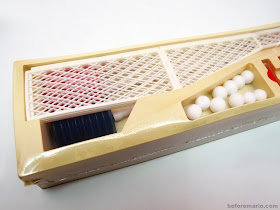 Furthermore included are six play figures for each side - a red set and a blue set, a set of light-weight polystyrene balls and two air-pumps, one for each player.


The play field has ten indents or little valleys. On each side of the play-field, ten holes are placed in a row, numbered from '0' to '9'. 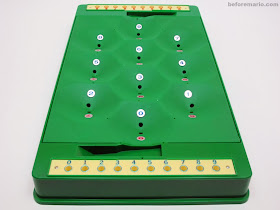 Each of these holes on the side of the field corresponds with a hole in the playing field with the same number. 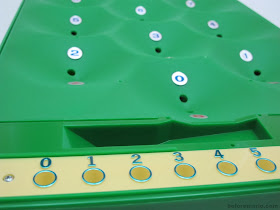 The game is played by propelling one of the polystyrene balls from one side of the field to the other and eventually into the goal, by blowing air in the right hole with the air pump. A total of ten balls is played, and the total score at the end decides the winner. 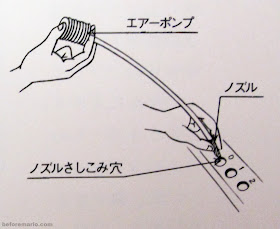 Depending on who of the two players is first to insert the nozzle of the air-pump in the right hole and squirt some air, the ball will be shot up or down the field. This is achieved through an intricate set of plastic tubes underneath the play field. 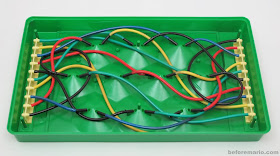 In each of the valleys in the play field two tubes arrive, that direct air in opposite directions. 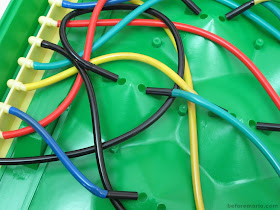 The fences placed around the field prevent the ball from going out. The player figures are placed on fixed positions on the field. These are actually more obstacles to negotiate when passing the ball forwards than any active help during the game. 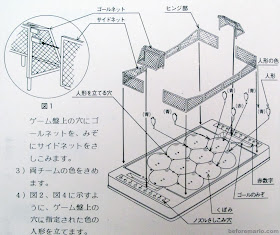 This set-up results in a frantic, fast-paced action game. A struggle of reflexes, trying to beat the other player constantly in quickly recognizing the right hole, while the ball bounces across the field, and directing the pump to that hole. 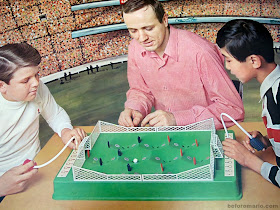 The ball usually passes back and forth a large number of times between both sides, pretty much like a real soccer game. Success is only achieved when a player manages to string a series of well timed "pumps" together. When the ball finally lands in your opponent's goal, this is quite satisfying.