To most readers of this blog it will be well-known that Nintendo started corporate life as card manufacturer, back in 1889. They have been producing cards ever since, up to the present day (check out the current 'other products' section on Nintendo's website for some recent examples).

As cards are such an important part of their history, the subject may have been a bit underexposed here, although I did post about them a few times before.

The cards that Nintendo produces can be grouped in four main categories:

(In more recent years, this has been extended with Pokemon cards and other video game related spin-offs like eReader cards, but we will focus on the more traditional cards here.)


In previous posts, I already put a spotlight on some Nintendo Trump cards (see these stories about picture book trump cards, early playing cards, promotional Popeye cards, 1980s playing cards catalogue and some naughty pin-up playing cards). These only showed a minuscule tip of the proverbial iceberg. Nintendo produced so many different Trump card design that I don't dare estimate a number, but it must run in the hundreds, possibly thousands.

I plan to cover Hanafuda and Hyukunin Isshu in the future, but today we start taking a look at the Iroha Karuta.

The two examples shown here stem from the early 1960s, from the time when Nintendo had just introduced their stylish cursive logo. 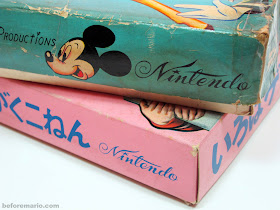 Iroha Karuta are targeted at children in elementary school, who have started learning the Japanese hiragana and katakana scripts, and the pictures on the cards and overall design are tailored to this young group of customers. 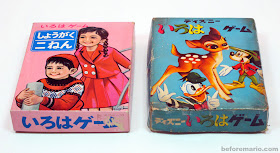 The Iroha Karuta help children learn hiragana, and they are played in schools as well as at home.


The first game we take a closer look at is called Disney Iroha Game (ディズニーいろはゲーム), for obvious reasons. Nintendo acquired a license to Disney's characters in the 1950s, and they used this extensively throughout the 1960s, for many different games like Trump cards, board games, a baseball game and these Iroha Karuta.


An Iroha Karuta game has two sets of cards of 48 cards each, so a total of 96 cards.

One set of cards are called the 'reading cards' or 'yomifuda' (読札). These contain text only, with a Japanese phrase each. Depending on the theme of the cards, this phrase can be a proverb or a saying, a part of a story or a description of an activity. Each of the 48 phrases on the yomifuda cards start with a different syllable from the hiragana set. Well, to be precise, only 47 of the 48 hiragana monographic syllables are used, as the 'ん' cannot be used at the start of a sentence. In Iroha karuta games, this syllable is usually replaced with the kanji '京', which means capital.


The other set of the cards are called 'grabbing cards' or 'torifuda' (取り札). Each torifuda card has a unique picture and one of the hiragana syllables.

Like in the example shown below for the syllable 'い': the torifuda card featuring a merrily strolling Mickey is linked to the yomifuda card with the phrase 'いさましくミッキーマウスはすすみゆく' (translated liberally to 'Mickey Mouse keeps a good pace').


The standard Iroha Karuta game can be played with three or more players. During each round of play, one of the players is designated the 'reader', who will lead the game. The other are contestants.

At the start of every round of the game, all cards are shuffled. The reader keeps the stack of yomifuda cards. The torifuda cards are arranged on the floor, with the pictures exposed. All players sit around the torifuda. They are now allowed to memorizing the position of each card, for a set period of time (usually between 5 and 15 minutes).


After this preparation phase, the game really start. The reader will now read, one by one, the phrases on the yomifuda cards. As soon as the players recognize the first syllable of the phrase, they should grab the corresponding torifuda card as quickly as possible. If they have memorized them correctly, they can do this instantly, without even looking. Whoever grabs the card first can keep it. The player with the most cards at the end of a round wins. 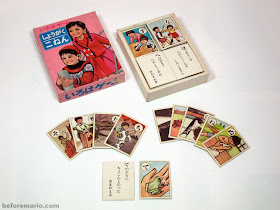 The cards of this set depict typical scenes from the life of an elementary school child.

The pair below, for the syllable 'て', has a torifuda card depicting a frog that has been caught by a child. The corresponding yomifuda card has the phrase 'てのひらにちょこんとのったあまがえる', which means 'A tree frog that sat quietly on the palm of your hand'. 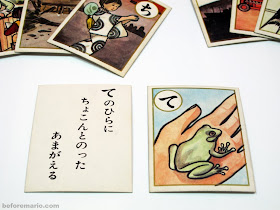 The Iroha Karuta game can get pretty heated as players battle it out to grab cards, but respecting the other players is also part of the learning experience (with players bowing at the start and at the end of the game). All in all it is a great education tool.

I don't think I have ever seen a similar game in the West. It would have made learning the A-B-C a lot more fun!