Nintendo's logo through the years - part 2

A previous blog post on Nintendo's logo's through the years showed the many different logos that Nintendo went through until they settled on their current company logo.

When I gathered the visuals for that article, I was surprised of just how many different styles Nintendo had used in the period from around 1965 until the early 1980s.


That article however failed to mention an important logo that Nintendo had used for a number of years from the 1950s to the mid 1960s: the 'Ace of Spades' logo.


This logo obviously stems from the period in their history when Nintendo was still primarily a playing card manufacturer. It has two specific style elements: the white spikes that are drawn around the inner spades shape and a circle in the middle with a gothic-style letter 'N'.

So, Nintendo already used a big 'N' in their logo years before they themselves would be addressed as "The Big N". I think this is called destiny.


It was introduced around the time when they increasingly started selling Western style trump card sets, many of which were illustrated with Disney characters.

For a long time, I believed there were 48 different games in Nintendo's 1970s Mini Game Series. Over time I managed to add 47 of these to my collection, only missing Diving Shot (ダイビングショット).

But this week one popped-up that I had not heard about before: a Mini Game version of Space Ball (スペースボール). Bringing the total for the series to 49, and increasing my wanted list to two.

Half a million views!

In September of 2011, I reported that beforemario had passed the 50,000 views mark. I had started the blog 7 months earlier in February of 2011 and I was surprised that it attracted a steady number of visitors.

Two years on and the interest has only increased. Yesterday we hit 500,000 views! 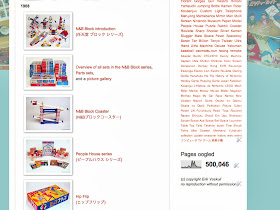 To me this shows that the efforts put into the posts on this blog are appreciated by many around the world. The story about Nintendo's history exalted on these pages also crossed over to other media like books, magazines (like Retro Gamer in the UK, Game Master in Mexico and recently N-Zone from Germany) and television programs.

And most importantly, the blog provided me with a platform to get in touch with some great folks from around the world, which in turn allowed me to post about their wonderful collections, so you could meet them as well. The Meet the Collectors series has become my personal favorite posts on this blog.

Thank you to all readers for your continued interest and to all folks who contributed and helped me along the way!

In the late 1960s and early 1970s, Nintendo licensed many games from various Western toy companies. 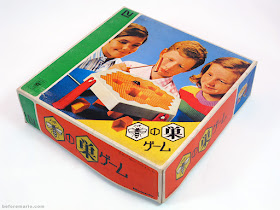 Nintendo's Bee Hive Game is a typical example of this. 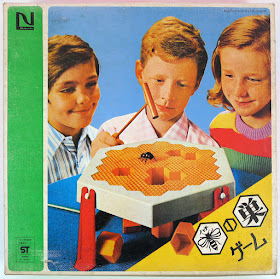 It was released in Japan in 1971, in a box adorned with two (rather freckly) Western kids and a Japanese boy.